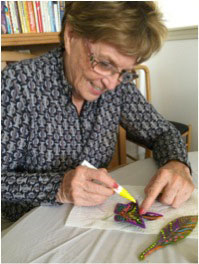 An easy and lovely craft to do with older adults or intergenerationally is leaf painting using chalk markers. The markers work like other felt-tip markers, but look more like chalk and can be rubbed off with a damp cloth while they are still moist or only freshly dried. Anything perceived as a “mistake” can therefore be easily corrected. 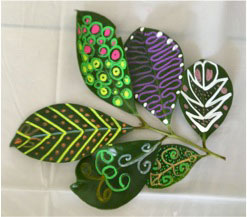 The idea came from another crafter who used fallen oak, maple, and other colorful fall leaves as a canvas, but because we live in Florida where deciduous trees are rare, our group experimented with real green and fake fall leaves. The real leaves were chosen randomly for their shapes. I clipped them from both a roadside wooded and (I confess) a landscaped area on a morning walk, then kept them damp until shortly before our painting session began. The fake leaves came from a craft store and a dollar store. Michael’s sells fake maple and other leaves in packets, but my best bargains were taking a drastically price-reduced garland of fall leaves and two leafy silk “bouquets” and clipping them into individual leaves. 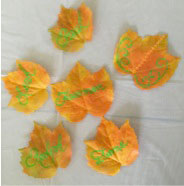 Designs
As you can see from these pictures, some people preferred to simply accent the natural veins in the leaves, while others opted for fancy patterns.

What didn’t work well among the fake leaves: 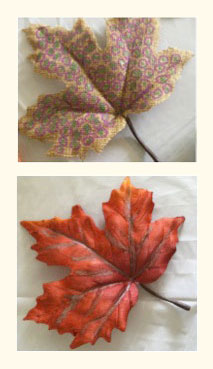 The burlap leaves were appealing, but tended to dilute the chalk colors. A different type of marker or paint would work better on them.

The very bright leaves that were originally part of the garland had plastic spines that prevented the leaves from laying flat and like the burlap leaves, tended to absorb the colors so they didn’t show up as well.

Below: Green leaves shrivel over time – even waxy ones 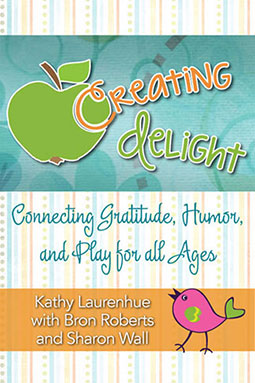 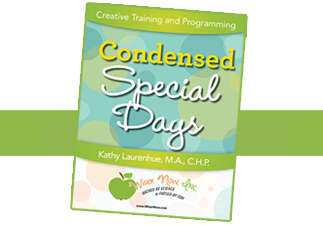 • Are you overwhelmed with choices for what to celebrate?
• Do you need planning shortcuts?